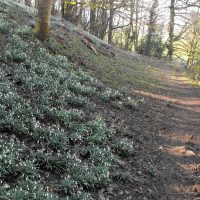 Behind Devizes Cemetery is a hidden gem of a woodland walk, taking you from near to the canal to Quakers Walk.

How to find Belvedere Woods, Devizes →

The steep slopes in the woods are formed of soft greensand rock. Rain-water slowly makes its way through the rock before it gushes out as clear springs at the bottom of the valley, carving deep gullies into the hillside. The Greensand acts as a sponge, with the water squeezed out by the Gault clay that lies below.

A Short History of the Woods

The area has been used by people for thousands of years. Prehistoric people, Romans and Saxons all farmed the level fields, and trees on the steep slopes were used for building houses and firewood. In the medieval period the area was part of a deer park that belonged to Devizes Castle. Later, the ‘New Park’ became part of the estate belonging to Roundway House, built for the Nicholas family the 1630’s.

The house was rebuilt and enlarged to designs by the architect James Wyatt in 17 . The house and estate were bought by the Colston family in the 1840’s, and Charles Colston was made Lord Roundway in 1916.

Belvedere Wood is named after the silk mill that lay in the meadow at the bottom of Dyehouse Lane. It was owned in 1848 by Frederick Walker and the stream turned the mill wheel. Devizes was famous for its silk and ‘cassimere’ weaving, and the stream in the valley provided the water needed for the dye-house that gave the lane its name.