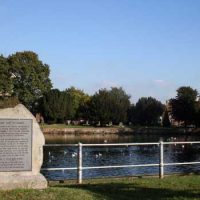 The Green is used for Fairs, Circuses, charity and community events. It is split in two by the A342 Andover Road and for reasons which become clear when you visit are called the Large Green and Small Green.

Perhaps the most famous local legend is that of the Moonrakers, which is reputed to have taken place at the Crammer (the town’s pond) .

The story goes that a group of Wiltshire smugglers heard the Excise Men approaching the town, therefore they had to quickly conceal the contraband brandy they were carrying by rolling the barrels into the Crammer. Once the Excise Men had passed, the smugglers needed to recover the barrels using a rake. The Excise Man were suspicious and therefore came back to take a second look. Catching the men with rakes they demanded to know what they were doing.

Not being stupid, one pointed to the reflection of the moon in the water and said that they were trying to rake out the cheese from the water. The Excise Men left, laughing at how stupid Devizes people can be. However it was the smugglers who had the loudest laugh as their quick thinking had stopped them being caught. To this day, Wiltshire people are known as ‘Moonrakers’.

Please do not feed the Ducks and Swans

There is quite a lot of wildlife which make the Crammer their home; however, we ask that you do not feed bread to the ducks, swans or the geese as this can create many problems for birds and the environment.

Five reasons why bread is bad…

So, what can you feed ducks?

For your free guide from the Canal and Rivers Trust, click the link below.