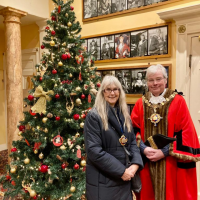 “One can never have enough socks,” said Dumbledore. “Another Christmas has come and gone, and I didn’t get a single pair. People will insist on giving me books.”
J.K. Rowling, Harry Potter and the Sorcerer’s Stone.

A quote from one of my favourite books however, Harry might have reminded Dumbledore that it is the giving at Christmas that makes it such a special time of year and not the receiving. It is the opportunity for us all to show we care for others and to gratefully receive that caring.

As the American comedian, Bob Hope said “My idea of Christmas, whether old-fashioned or modern, is very simple: loving others”

It is the love for others that is the best gift we can give, not presents – even socks!

However, Bob did go on to say “Come to think of it, why do we have to wait for Christmas to do that?”

Which I guess is one of those special things about Christmas, in that its occasion reminds us how we should always behave to others and perhaps after this difficult year of 2022, Charles Dickens’ pledge, is one we should share as we stand at the gate of the daunting year of 2023.

“I will honour Christmas in my heart and try to keep it all the year.”

The lady Mayoress my wife Chris and I would like to take this opportunity to wish you a loving Christmas, a restful holiday and a healthy new year.

A blessing was given by the Reverend Jonathan Poston the Rector of St Johns Church Devizes, the evening’s compere was the splendid Mr Lewis Cowen, Mrs Lucy Wain was the combined choir’s conductor and Diana King was the pianist accompanying the choirs

The Mayor commented that it was a wonderful and magical evening that set the Christmas spirit in all those that attended.