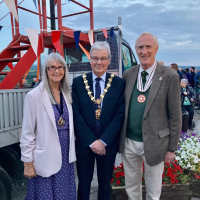 We hope you all had a fantastic Bank Holiday weekend full of royal celebrations!

The Mayor has been busy visiting many of you at Platinum Jubilee events happening in Devizes this weekend. Here is just a snippet of what Cllr Peter Corbett has been up to.

The Mayoress Chris Corbett and Deputy Mayor John Stevens attended Southbroom Primary school’s Queen’s Platinum Jubilee party where they had great pleasure in meeting many of the pupils and organiser Karen Gibbs.

Thursday was the opening of the Majesty exhibition in St Mary’s Church in Devizes both the Mayor and Mayoress of Devizes, Peter and Chris Corbett, and the Deputy Mayor and Mayoress, John and Mary Stevens were in attendance. The exhibition showcased art produced by children at three local state-funded primary schools – Southbroom St James’, Trinity, and Wansdyke – after they worked with professional artist Joanna May and historian David Evans to explore Devizes’ historic links with the monarchy. The Mayor said “It was an honour to see such wonderful work produced by the children.”

The Mayor was also pleased to have visited and met with the residents and staff at the Avebury Care Home Devizes. Mayor Peter Corbett said “it was lovely to meet with so many interesting and inspiring people and share their Queen’s Jubilee celebrations”

Those of you at the Big Picnic in Hillworth Park on Sunday would have also spotted the Mayor in attendance stopping and chatting with people whilst they enjoyed the live music and entertainment.