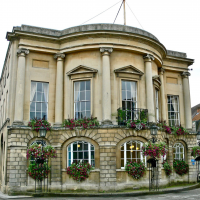 The issue around the Crammer I know has been causing some concerns locally and this was highlighted by the recent van fire when some contamination ended up in the water. We have known since 2012, when we undertook significant repairs to the walls of the Crammer that water or to be clear the silt that lines the bottom contains amounts of hydrocarbon and other contaminants which have accumulated over many decades and which is attributable to water run-off from Estcourt Street that enters the Crammer and indeed the only reason we had some contamination after the fire was because the water used to extinguish it entered the road drainage system which flows directly into the Crammer. What we are currently doing is taking new samples of both the water and silt to better understand if over the last 10 years or so, there has been a significant increase in the overall level of pollution in the Crammer and if so, what if any impact this is having on the wildlife that uses it.  In 2011 when the last tests were undertaken, it was concluded that whilst you might not want to drink the water, the Crammer was still safe to be used by wildlife and indeed the advice was that we leave most of the silt and water in the Crammer. Given the volume of water and silt in the Crammer the additional contamination entering the water was minimal in comparison with what is already there, albeit unsightly and did affect wildlife in the short term because it floated on the surface before sinking into the silt. Clearly going forward the Council has some difficult decisions to make about how it manages the Crammer and there are many factors to take into consideration including the welfare of wildlife, the area’s rich cultural and heritage value, as well as the impact on neighbouring properties, as the Crammer acts as a Dew Pond or in today’s modern building language, a Sustainable Drainage System  (SUD) and therefore its historic purpose is to manage water run-off from adjacent land. As you can appreciate any longer-term changes to how water enters the Crammer will have the propensity to have a serious impact on both the pond itself and also drainage in the area, therefore if any changes are to be made, there will need to be wider consultation with both the community and ecology experts. Be assured, that the Council is seriously looking at the longer-term management of the Crammer, but in terms of the recent incident, as I have previously said, it has highlighted the issues the Council has been grappling with for years, but in itself, has only caused a short-term problem which our friends in the wildlife protection services helped us to deal with at no cost to Council Tax payers.

Users of Quakers Walk have been lobbying us to reinstate the bench following a spate of anti-social behaviour in the area, but before doing anything we wanted to take the opportunity to gather the views of users and residents in the area. We had 155 responses and not surprisingly, the majority of those who responded use Quakers Walk,  but of those who use Quakers Walk under half were residents. The full response to the consultation is available on the Council website, but on balance, most people want a bench put back but there is still a concern that it will become a “hot spot” for anti-social behaviour, but it was also felt this should not be a reason to not put the bench back.  There was also a strong view that we should possibly increase the number of benches in the area. The plan is to replace the metal bench in a similar location, but on the opposite side of the path looking towards the fields. There will be a slight delay as it needs to be bolted down and this means we need to build a new concrete base. We would also like to explore the idea of log seats in Quakers Walk itself, which we will discuss with the community group.

Finally, there is less than one month until the Birmingham 2022 Queen’s Baton Relay will be in Devizes as part of its final journey through England this summer, leading up to the Birmingham 2022 Commonwealth Games. Devizes will officially welcome the Queen’s Baton Relay on Tuesday 5 July. The Queen’s Baton Relay will culminate in the host city of Birmingham, where it will have a central role in the Opening Ceremony on 28 July 2022. During its time in Devizes, the Queen’s Baton Relay will begin the first leg of the day, starting in the Market Place at 8am, and taking a journey through the town on a horse-drawn dray towards the canal, where it will travel by canal boat to the town lock (lock 50) then along the towpath to just past the cafe at the Caen Hill Locks. Members of the public are encouraged to come along and watch the Baton Relay. Spectating opportunities will be provided from the Market Place or the Town bridge to the Cafe at the Caen Hill Flight of Locks.

To deliver the Queen’s Baton Relay, Devizes Town Council is working in partnership with Wiltshire Council and the Canal & River Trust.